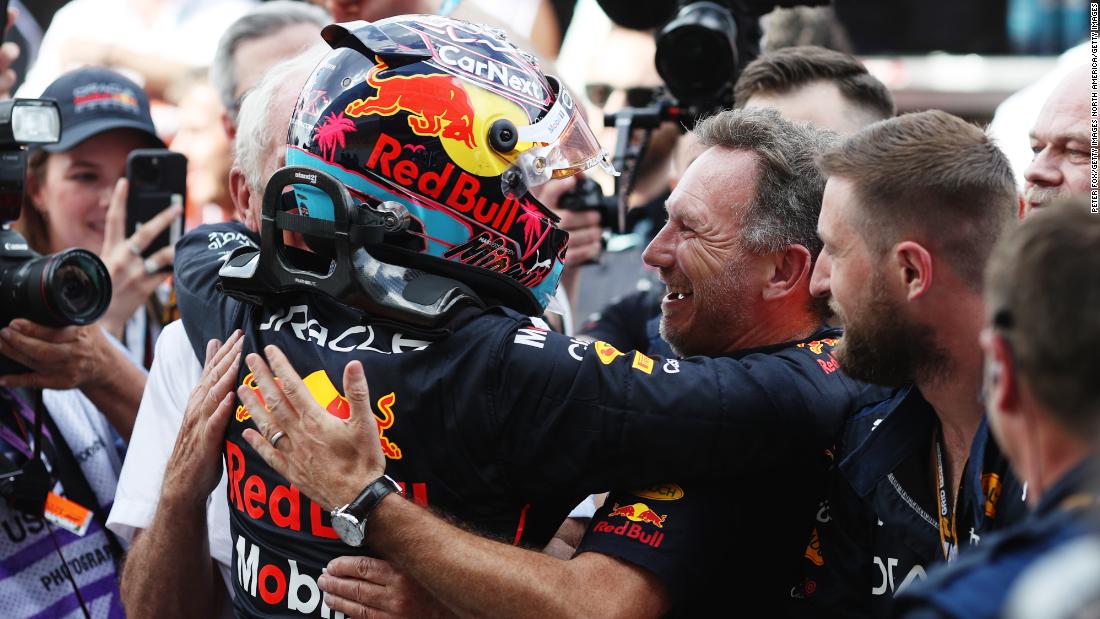 That’s largely due to the contrasting fortunes of two teams — the resurgence of Ferrari and the struggles of Mercedes — making the outcome of this year’s championship impossible to call.

Ferrari’s Charles Leclerc currently leads the driver standings, 19 points ahead of Red Bull’s Max Verstappen, who claimed his third win of the season at the Miami Grand Prix on Sunday.

Just six points separate those two teams in the constructor standings, while Mercedes — triumphant in the past eight seasons — finds itself uncharacteristically trailing in third place.

“Charles Leclerc’s doing a great job, Carlos Sainz is a first-class driver as well … We know Mercedes will sort their problems out. It’s great for Formula One to have another team in the mix.”

For Horner, this season feels something like a changing of the guard; Verstappen and Leclerc are both 24 with years of racing potentially still ahead of them.

“It’s a great competition between this young generation that’s coming through,” he adds.

“Charles and Max have raced each other since they were kids. The racing between the two of them at each Grand Prix so far this year has been fantastic.”

After a dramatic and controversial conclusion to last year’s championship — which saw Verstappen win his first title over Lewis Hamilton at the season-ending Abu Dhabi Grand Prix — Red Bull looks set to be engaged in another arm wrestle this season.

New regulations that were introduced at the start of 2022 forced teams to completely redesign their cars. The changes have seen Ferrari thrive, Mercedes struggle and Red Bull outperform the team’s initial expectations, according to Horner.

“Having put so much effort into last year’s car, to come on to these new regulations, we elected to take that risk because we had an opportunity to win last year and you’ve got to go for it,” he explains.

“That put huge pressure on the team coming into the second half of last year that we had to play catch up. Personally, I didn’t expect us to start the year as competitively as we have.

“To be on the front row of the first race, to win the second race, to win and get a one-two in Imola has been an unbelievable start for us, and I think testimony to all the team for doing such a phenomenal job in such a short space of time.”

Last weekend’s Miami Grand Prix was, before Austin, the first of two races in the United States this season, while next season will see three with the Las Vegas Grand Prix added to the calendar.

The sport has had a recent surge in popularity in North America and enjoyed a 58% growth in TV audience numbers in the US last season compared to the year before.

That increase in viewership has partly been fueled by the popularity of “Drive to Survive” — a fly-on-the-wall Netflix docu-series which has now covered four F1 seasons.

“Netflix has done a great job of opening it to a whole new audience,” said Horner.

“It’s explained how the sport operates, it’s shown who some of the drivers are, what some of the dynamics are.

“But the sport has still had to deliver, and last year was just an epic year — the competition from the first race to the last race, it was like a heavyweight fight from across 22 different rounds. It was a phenomenal championship last year … a producer’s dream.”

And if this season’s championship can deliver the same levels of drama — albeit with new protagonists — then audience numbers are likely to continue to grow.

“So long as we keep having Grands Prix on Sundays and it remains a competition of man and machine at the limits, that’s what it’s all about,” says Horner.

“Of course, it will evolve … everything evolves in life. I think Formula One is going through that evolution as we speak.”