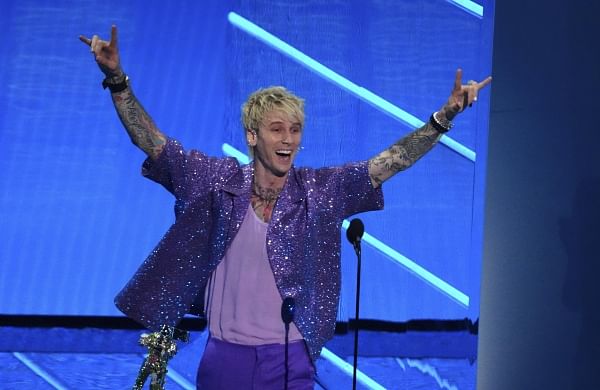 He kept very tight-lipped about their wedding plans as he stepped out at the premiere of his new directed movie, reports mirror.co.uk.

When asked if he and Fox would “pull a Travis and Kourtney” and elope, MGK, whose real name is Colson Baker, said: “I want to kind of just let the world see that as it comes.”

Speaking to James Cordon about the finer details of his big day he said: “The location is hard, trying to find a spot that’s matching my artistic (vision).”

He was asked when they planned on getting married, and replied: “When they can build me, like, a red river with gothic..” before he trailed off.

The 32-year-old met Fox on the set of ‘Midnight In The Switchgrass’.

He directed Fox for her role in his new film, adding: “She didn’t let me lead her character too much in any direction.

‘She was like “I got this. I understand what this character is.” She improvised and brought Kennedy to life, and I’ve heard a lot of people say that that’s their favourite character in the movie,’ he noted.

MGK is also featuring in the film as character London Clash, who finds himself choosing between love and a movie role.

Fox revealed that she made a slightly odd request for what she wanted for her birthday.

She said that she asked her fiance that she didn’t care what they did on her birthday, so long as there were no phones.

“My main request is always just no cell phones,” she told Directo.

“So, whatever we do, wherever we go, I just want there to be no phones.”

She gushed over MGK’s work on set: “He was amazing, so was Mod.

He wrote the whole movie in, like, three days, which is incredible. He gets these bursts of creativity where he sort of downloads something from the universe and puts on an amazing product really quickly.”

MGK was equally as complimentary of his future wife.

“I just think she’s comedically genius. I think she’s so underrated as a comedic actor and just as an actor who can adapt to different faces and phases, so, it was an honour.”